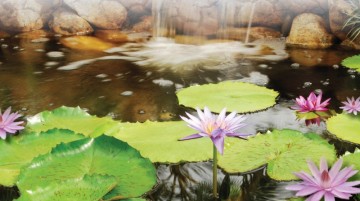 Pictures are worth more than a thousand words.

There are unlimited ideas, styles and designs that can create your personal Oasis. Inspiration is just a click away...

Check out our Idea Gallery

Interested in a Pond, Fountain or Waterfall ? Call us today to schedule an appointment!

Our team can make your dreams come to life.

We at Oasis Aquatic Services stand for Honesty...Integrity...Reliability and Creativity. With the Knowledge of a combined 25+ years experience in the industry we make sure that your project goes smooth and efficient.

We are fully licensed and insured to do on site construction work specifically for this industry.

See for yourself and get to know us better!! 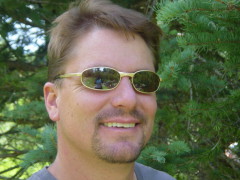 Michael Northway built his first pond in the summer of 1995 in his mother’s back yard. It was such a success and was so much fun that he decided (with strong encouragement from his wife) to start his own business. Michael and his wife Nancy started Oasis Water Design shortly thereafter. The business ran successfully and grew rapidly. In 2005, after a one year hiatus from the industry, Michael was hired as the Operations Manager at Santa Fe Water Gardens, a local water garden retail store which was started by the well known Charles "Chic" Kelty (of Savio) in the mid to late 80's. With Santa Fe Water Gardens new owners, Michael helped to build a strong presence in Santa Fe for the retail store. By 2010 Michael, with his wife Nancy, went back out on his own and re-established Oasis Aquatic Services to continue his passion for the Design / Build side of the industry. In January 2014 Michael and Nancy decided to expand Oasis Aquatics into the retail sales market out of a space located in Santa Fe, NM.

Gino is an experienced Water Feature builder who has been in the industry for  over 25 years. His knowledge of Swimming Pools, Spas, Hot Tubs, Koi Ponds and Waterfalls has proven to be very valuable to the company.

Hector is an experienced Water Feature technician who has been in the industry for 15 years. His knowledge of hardscapes and irrigation has proven to be very valuable to the company. He loves to build water features and is proficient at maintenance and repairs.